Call for Submissions – The Potluck Club 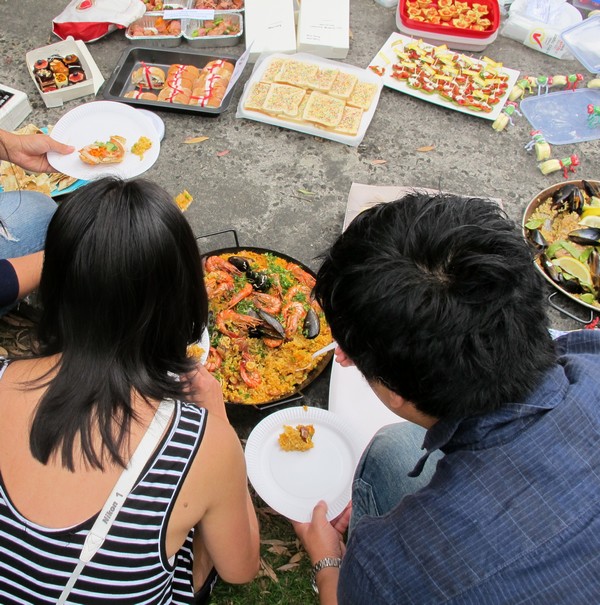 The Sydney Food Bloggers Picnic 2012, hosted by Suze and Helen.

The Potluck Club
The Potluck Club is a new ecookbook of simple, affordable recipes that anyone can cook. A fundraising initiative for The $35 Food Challenge, the ebook will be sold to raise money for Foodbank Australia.  A collaboration between food bloggers and budding home chefs, we are now seeking submissions for our first issue.

Please note: Recipe photos will be cropped to fit our layout and cropped images will be roughly square in shape. With this in mind, please send photos with plenty of space around the food, suitable to be cropped – pre photo-shop photos are fine.

What are we looking for?
We welcome a wide variety of recipe submissions to The Potluck Club, however the emphasis is on affordable food, so steer clear of hard to find or expensive ingredients- no truffle oil, expensive cuts of meat, isreali couscous, purslane,  etc.

We would love anything that is culturally specific or that people might not know how to make (shakshouka, summmer rolls) or really on trend (peanut butter bacon maple hotcakes, easy pulled pork)…while still being relatively inexpensive.

The book will be in 3 sections:

We are told time and time again that one of the easiest ways to introduce people to new cultures if by feeding them, because wherever we go, whatever we do, we all need to eat. So it’s no surprise that the main focus of the 2011 National Multicultural Festival was food. I have to admit that although I was born in Canberra and lived there for the first 19 years of my life I’ve never been to the festival before. So I wasn’t sure exactly what to expect from it, probably something like the food festivals we have here in Sydney. I was pretty sure there’d be gozlëme, that’s for sure. 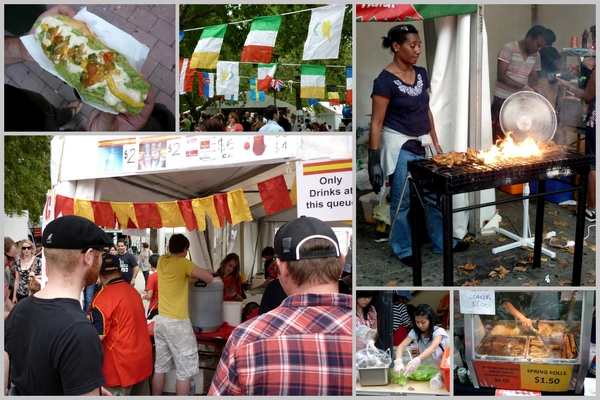 Last weekend my man and I were visiting Canberra for a friend’s birthday and she had concocted marvellous challenge- food golf. The idea was that we all had to dress in golfing outfits and prowl the festival, marking off various foods and drinks as we consumed them. Each item was worth various points and at the end we would tally up the scores and proclaim the winner. 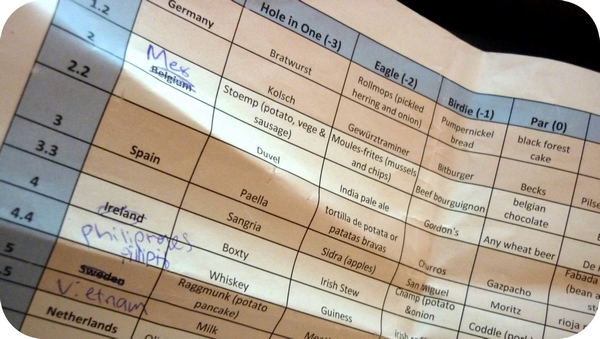 I stuffed things up by being the only one who didn’t get a costume sorted, and as we entered the multicultural festival at 3pm on Saturday, the atmosphere was not dissimilar to that of a moshpit and I began to wonder how likely it was that we would complete our challenge. One of the things I always forget about Canberra, a city where comparatively little happens, is what it’s like to be in the thick of it when something DOES happen. With an event like this, there’s a huge turnout and it feels like everyone in Canberra is there. Apparently, this year the three day festival attracted 100 000 people on the Saturday alone! That’s as many as it usually attracts for the whole three days.

I was impressed with food line-up, which went well beyond the usual suspects. Of course there was gozlëme, as well as German, Greek, Lebanese, Indonesian, Spanish, Mexican and Indian food, but there was also an endless list of national cuisines you rarely see, from Ethiopian to Chilean, Fijian, Samoan, Sri Lankan, Bangladeshi, Serbian, Argentinean and Mauritian to name a few. It was nice not to come across the same stalls that rock up to every Sydney and Melbourne festival I have ever been to. A tapas or poffertjes stall has no place at the Hyde Park Noodle markets, for example, and I wish organisers would take a leaf out of the National Multicultural Festival’s book when they plan such events. 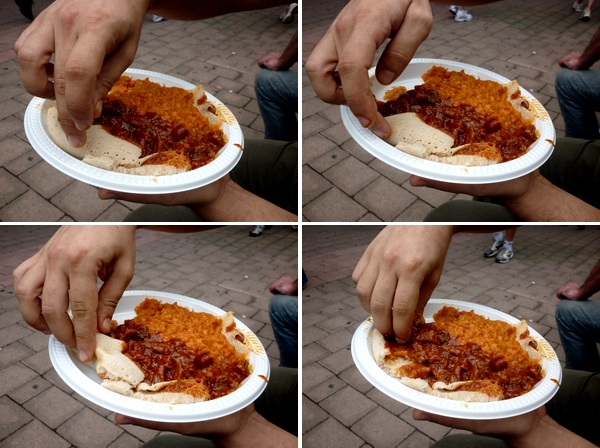 Even though we had a painstakingly prepared list of foods to ‘golf’ we made a beeline for the first Ethiopian stall we saw to grab a castle lager and some delicious injera topped with ‘sauces’, which I think is a good way to describe the way food in Ethiopia is eaten. The injera, a kind of crumpet-like sourdough pancake made of teff flour, is really the star of the show. We had it with a mild red lentil stew and a rich beef stew, with a pleasant heat from the berberé spices but not spicy per se. The injera was pleasantly sour and spongy- delicious! 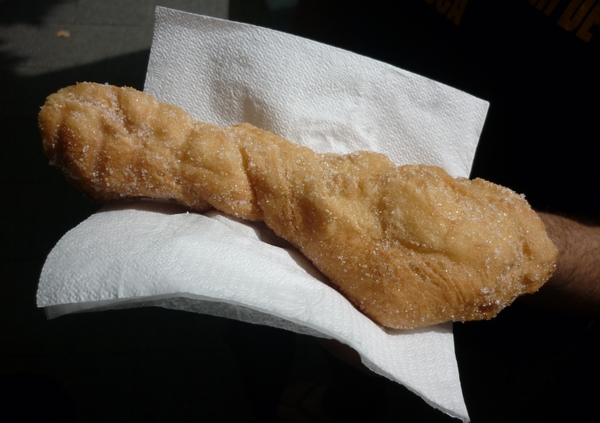 Then I spied another cuisine not on our list- Philippino. I couldn’t go past a pillipit, a plaited Philippino donut dusted in sugar so my boyfriend ordered us one. He had to ask the stallholder 4 or 5 times because apparently pillipits are also known as shakoys so she had no idea what he was talking about! Unfortunately, the pillipit was not freshly made and was doughy and chewy – kind of like a day-old chain store pizza crust, so I photographed it and we threw it away, not willing to waste precious tummy space on sub-par food. 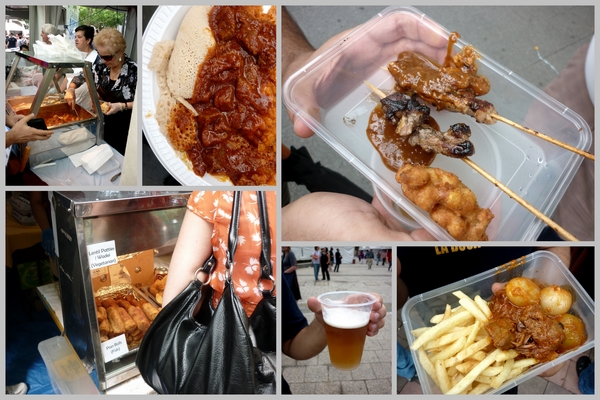 I was pretty stuffed at this point and needed a break but my boyfriend spied something intriguing at the Greek food stall. Again, Greece was not on our list but the Kokinisto, a meat and onion stew served with chips looked too good to pass up. I nabbed a couple of chips and a mouthful of stew and I’ve got to say it was pretty tasty but still not a patch on the Ethiopian beef stew. 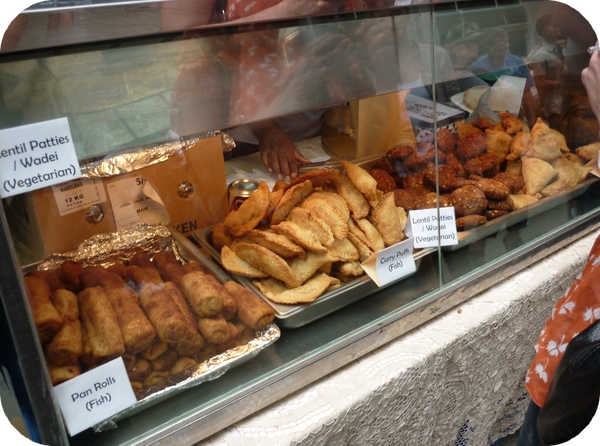 What I really wanted was some Sri Lankan pan rolls or some kind of coconut based curry and that’s when we came across one of the two Sri Lankan stalls. I snapped a few shots of the fried treats on offer, as well as the Korean stall where they were cooking up some bulgogi beef and spicy chicken on large bbqs.

We decided it was time to offset the heat with some more beer and spotted a Spanish food tent selling tapas, beer and sangria towards the Canberra Theatre end of things. The offerings there looked delicious- tortilla de patatas, gambas al ajillo, chorizo and so forth and at pretty reasonable prices. We grabbed a couple of Cruzcampo beers, an easy drinking beer but it wasn’t as good as I remembered. I guess it’s because I wasn’t in Spain and it wasn’t fresh out of an ice-cold tap. Oh well.

We came back to the Greek stall where I had previously seen about 50 people lining up for Loukoumades, Greek doughnuts slathered in honey. I really wanted to get a picture of them being made but as I snapped away, I realised what I really wanted was a plate of these delicious puffs. Having never tried them and still disappointed by my stale pillipit, I joined the long queue which moved surprisingly quickly. The loukoumades were fried, slathered in honey, plated up and topped with cinnamon and walnuts, all for the grand total of $5! They were delicious- crisp on the outside and pillowy-soft in the centre, sweet and sticky with the crunch from the bitter nuts offsetting the warming cinnamon. I have to admit I had more than my fair share. 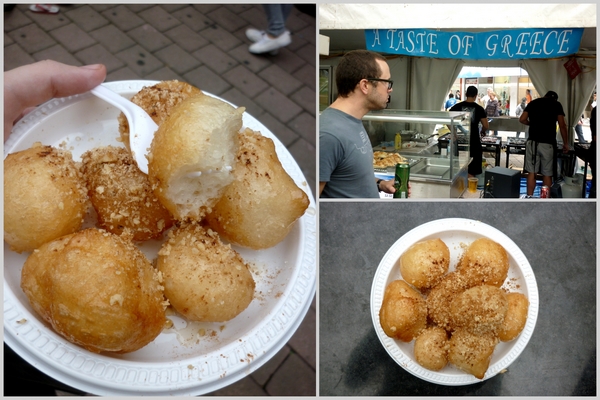 I noticed that there was a distinct lack of those fenced off little pig pens that have become the norm at NSW events serving alcohol. In NSW, public events require allocated, fenced off alcohol vending/consumption sectors, or else the whole event needs to be fenced off. The ACT has slightly different liquor laws to NSW and as such, although there was no glass allowed (all beers had to be poured into plastic cups), there was definitely a less restricted vibe, although still a police presence. The atmosphere was insanely busy and although it was quite hot and people were drinking, everyone was very laid-back and patient, even with all the lines and crowds. 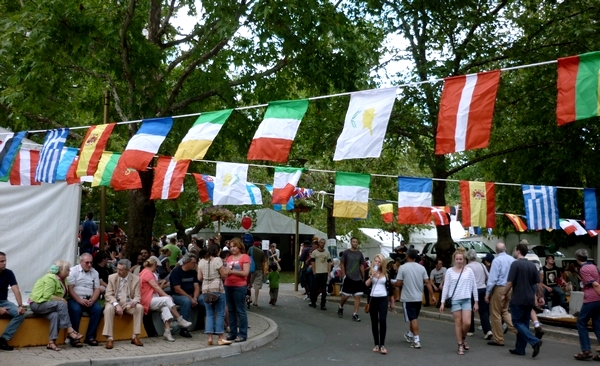 Finally, we saw a guy weaving his way through the crowd with a shopping trolley full of our least favourite kind of beer- Quilmes. We figured he’s be heading to the Argentinean stall, which we were yet to discover so we followed (stalked?) along after him. The poor guy had a hell of a time getting through the crowd and finally stopped at a Chilean stall selling completos and beer. A completo is a hot dog with the lot (complete) and I had to get one. It had mashed avocado, fried onions, mayo and American mustard and I added pebre, a Chilean salad/salsa. Disgustingly delicious. They also had a selection of Chilean, Argentinean and Mexican beers but none were cold yet as they’d only just been unloaded so we headed back to the Ethiopian stall and grabbed another beer and some Indonesian satay sticks from the Indo Café stall. Tender and charred, they were a perfect finish to a 5 hour meal. All in all it was a grand day, although we had no chance of winning food golf.