In my household, I do most of the cooking, because I’m speedy, pragmatic, and an absolute control freak. Everything I make is geared towards minimum effort for maximum results. As such I don’t prepare many of what I perceive to be ‘high risk’ foods.

So on Sunday when my boyfriend, Senhor R, offered to whip up a Pudim Flan (Crème Caramel) this week, I was all for it, even though neither of us have ever attempted to make such a thing. It turned out to be remarkably simple, which is in no way a reflection on his culinary skills. And it was so delicious that he actually made another one on Wednesday! I could get used to this…

Growing up, every Portuguese restaurant I ever went to had three staple deserts; Mousse Chocolate, Arroz Doce (Sweet Rice) and Pudim Flan (Crème Caramel), to be washed down with as many ‘bicas’ (espressos) as possible. Although there were occasional surprises such as Baba de Camelo (camel’s dribble) or the potentially explosive Molotov Pudding, you could always find these three. 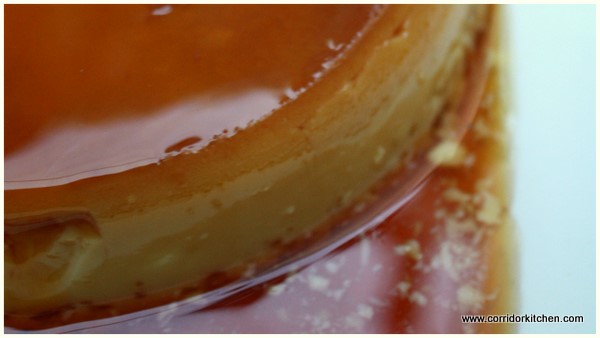 My Mum had the monopoly on the Mousse Chocolate market and was not averse to making her own custard for other desserts, but she never attempted a Pudim Flan. It remained an elusive delicacy that other peoples’ mums brought to feast-like gatherings, or something made in restaurants by people who understood such things. 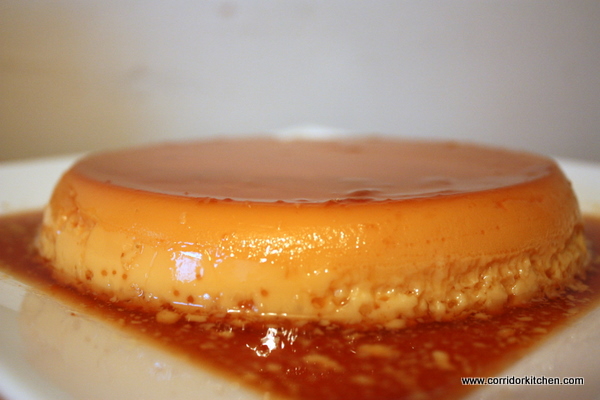 The closest we ever got to Pudim Flan was a packet of this dried stuff sitting in our pantry for many years. It’s possibly still hiding there somewhere. I have a dim memory of a packet being attempted once, but clearly with poor results as it was never spoken of again.

Then in Argentina Lau discovered her love for flan, mostly through her delight of dulce de leche which is always offered with it. The Flan was an excellent excuse to eat the giant dollop of dulce, much in the way few people actually add more than a token amount of milk to their Milo to legitimise the ‘drink’ status of it.

Last weekend as I was idly flipping through a Portuguese cookbook, and I came across this recipe and, armed with an abundance of fresh eggs I went to work. The question was – would Lau like it without the dulce de leche?

Pudim Flan from The Taste of Portugal by Edite Vieira

Pour the 100g sugar into the pan with the water and rapidly heat until all the mixture has ‘foamed’ and becomes a golden liquid caramel. Pour the caramel into the bottom of a round dish- I used a 7 cup pyrex storage dish. Turn the dish quickly to spread the caramel around the base. It doesn’t matter if it’s uneven, it will melt later.

In a saucepan, bring the milk up to body temperature. Whisk in the eggs and the 90g of sugar until well mixed. Pour into the dish.

Place the dish in a bain marie – basically a much larger oven proof dish with boiling water coming halfway up the side of the flan. Bake for 45 minutes to an hour. If it starts to brown too much, cover it with foil.

When you remove the flan from the oven, it will still be a bit jiggly – it will cool as it sets. When it is almost completely cool, run a knife around its edge, put a plate on top and turn it upside down. Serves 6.

Do you have a dessert you’ve never been game to prepare?