You spend HOW MUCH on food? 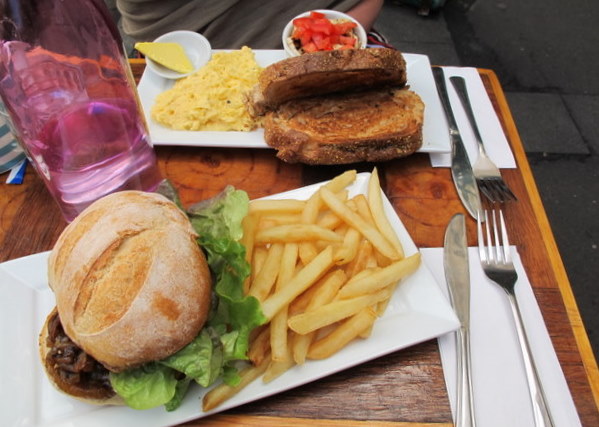 I’ve said it before and I’ll say it again- eating out will swallow you entire food budget. In fact, not only will it gobble it up, it will also, inexplicably inflate it to the size of a large, cranky walrus.

We all know this, minus the tusks perhaps, and yet we kid ourselves that we don’t know where all our money goes. According to the ABS, as of 2003/2004 the average household expenditure on food is around $150/week. However, the average household expenditure on entertainment is around $125/week. I don’t know about you (well, I know about you food bloggers), but eating out has become one of my main forms of entertainment. That in itself is a worry.

That is seriously embarrassing for someone who used to make do with so much less. And ok, so we had a friend staying from overseas for a few days, so we ate out more than usual. And we just moved house, so I’m buying groceries a few times a week rather than once a week, and we’ve ordered in a tad more than we usually would…

This is all true, but it’s no excuse for one person to spend nearly $200 on a week’s food!

The scary thing is, when you break it down item by item, no one purchase looks unreasonable. Popcorn at the movies? You gotta have popcorn at the movies. Buying steak, fruit and cheese at the grocery store makes perfect sense. And on Thursday, I ran out of milk, so I had to buy toast on the way to work rather than make the porridge I’d planned.

But that’s how it is. These teensy little things add up. And for some people, a serve of toast or a cup of coffee might actually break the budget. Whereas I’m just left mildly confused about what I keep spending all my money on.

Wanna know something even more shocking? I live in a 2 person household. This week, our household spent OVER $400 ON FOOD.

On the plus side, OzHarvest will be getting a healthy donation from me pretty soon.

It’s not too late to support The $35 Challenge. During Anti-Poverty Week, from October 16-22, participants have $5 a day to spend on food. By experiencing poverty for just 7 days, we come to a better understanding of the realities and stresses of those living in poverty. By blogging or tweeting this experience, we can raise awareness of an issue so often swept under the rug. And by donating the remainder of the money we would usually spend on food to OzHarvest, we can make a real difference.

What about you? How much do you usually spend on food?

2 Responses to You spend HOW MUCH on food?